My first ever Goodreads (Goodreads Giveaways) ‘Giveaway’ competition has just reached its conclusion and I have to admit I was stunned by the response.

We ran the competition, giving three signed books away (with limited edition bookmarks) over a month. We opened it up to UK, US and Canadian Goodreads members, we even splurged on a bit of marketing and paid for a ‘pay-by-click’ advertising campaign on the Goodreads site that included a link to the giveaway. 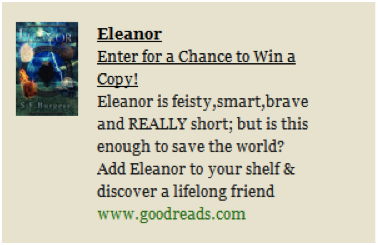 This pay-by-click adverting allows you to set how much you are willing to pay for each click i.e. 10 cents, 20 cents, 50 cents etc., and the more you are willing to pay the more often your advert will be seen and therefore, hopefully the more people you will get the cover of your book in front of. We started the campaign off on 50 cent a click. As we began to run out of money, we dropped the click price down to 10 cents.

As you can see, from the stats, there were approximately 1200 views for every one click, a click through rate over all, of 0.08%, which isn’t brilliant. Although at one point it did get as high as 0.13%! The algorithms that control how often your ad is shown are known only to Goodreads, but it seems the more the advert is clicked during the day, the more it is shown the more chance it has of being clicked.

Of course, being a bit gung-ho we set all this up before we read the advice (How to Run a Goodreads Giveaway with Maximal Results – link currently down) on how to do it! Having read this article we opened the competition up to every country covered  on  Goodreads and the entry numbers started raising. By the end of the competition 1332 people had entered. 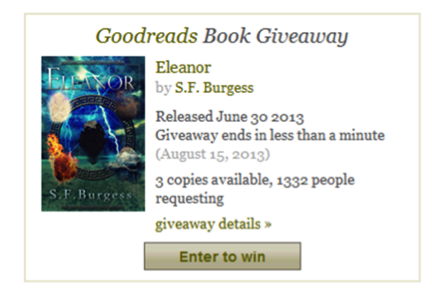 1332 people the majority of whom I didn’t know had had my book cover in front of them, had perhaps read the blurb (thank you Jon and Laura!), but, more telling over 600 people added Eleanor to their ‘To-Read-List’, if only 10% of these people follow through on this, I’d still be a VERY happy bunny. 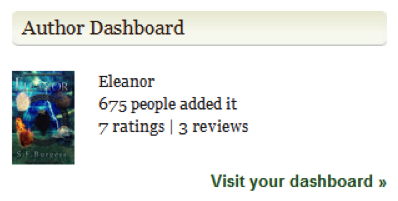 I can’t BEGIN to tell you the excitement of watching the entry numbers raise as the competition came to a close, towards the end we had about 2 people a minute entering! The 1332 entries I got put me VERY high on Goodreads ‘Most Requested’, which I think also helped with getting further enties.

Once the competition ended, Goodreads promptly sent me the details of the winners they had selected, one in Denmark, one in Belgium and one in Italy. I immediately sent out ‘Friend’ requests with a congratulatory message attached through Goodreads. I heard back from two of the winners immediately and was delighted by how happy they appeared to be at winning. At this moment, I have had my friend request accepted by the third winner, but I am yet to receive a message response.  Yesterday I packed up my three personally signed giveaways and sent them off, hoping that good reviews came of it.

Whatever the outcome, the number of people who have seen my book and shown an interest (by adding it to their ‘To-read-list’) makes the giveaway worth the money we spent on it. I think, once I have a few more reviews, I will be running another one!

After the competition finished, I received, (through the book website and Goodreads) requests from people for a free paperback copy of the book in return for a review. Being unsure about this, we did a little research and discovered the following article (How to Beat the Giveaway Scammers). So in the future anyone asking for a paperback copy (which costs me $20 every time I send one out!) will be offered a gifted Amazon.com or iTunes version and once they have posted the review, I will be happy to send them a paper copy. If they wish to sell it on e-bay at this point, then fine, as it would mean I got my review and yet another person got to read the book :-), a win-win situation.

This site uses Akismet to reduce spam. Learn how your comment data is processed.